US President Donald Trump said that German Shepherd type border patrol dogs do a better job than “$400 million worth of equipment” during the Rx Drug Abuse & Heroin Summit on Wednesday. 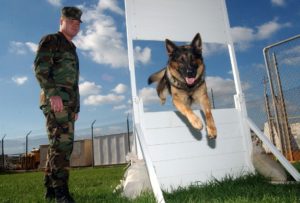 He based his statement to a response that “the dogs are better” when he asked personnel during a briefing with the border patrol on how the $500 million worth of equipment at the ports of entry are performing compared to dogs.

These dogs are deployed to detect drugs at the US-Mexico border.

Canines are taught to detect odors of controlled substances, which include:

Some breeds like German Shepherds are used both for their sniffing abilities, as well as to apprehend suspected offenders.

The president is perceived as being averse not only to dogs but to pets in general, breaking the White House tradition of having a pet.

The Trump family is the first pet-free family in the White House since the family of John Adams, although the latter had three dogs and two horses; and the president who preceded him, George Washington, had three foxhounds, four black and tan coonhounds, and a donkey.

Earlier in the year, Trump did float the idea of getting a dog but eventually decided against it since it feels “a little phony” to him.

Nonetheless, Trump appreciates the border patrol dogs calling them “great dogs” and saying that “we cherish them.”