Home Dog Stories This Goldendoodle is One Tough Survivor

A one-year-old Goldendoodle named Bentley showed his grit by surviving a car crash and being lost so far away from home.

Bentley went missing after being thrown off a vehicle that crashed and had to endure weeks of being lost in another state before being reunited with his grieving family.

His family from Kansas was visiting Colorado when the car crash happened, claiming the life of Jennifer Orr and injuring her daughter, Samantha Orr.

After the accident, this Goldendoodle, a cross-breed between a Golden Retriever and a Poodle could not be found at the site of the crash. 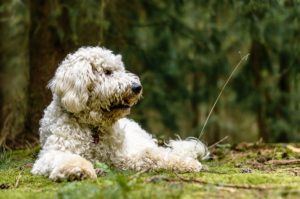 A gooldendoodle dog, just like Bentley. Image by Daniel Brachlow from Pixabay

It’s a good thing that the Orrs found compassion from the people who were aware of the tragedy and mobilized themselves to search for Bentley, described as a white, fluffy dog.

People also distributed flyers and put up a Facebook group to give tips and advice in looking for a traumatized and scared puppy.

Samantha also flew back to Colorado in efforts to retrieve Bentley.

When Bentley was spotted near the crash site, Samantha hiked with a group to look for her missing dog.

And there was Bentley.

Since Bentley was scared, Samantha devised a plan to encourage the dog to approach her.

When Samantha got close to Bentley, she laid down and unpacked some food and a toy.

When Bentley dropped his guard, Samantha scooped him up.

Bentley, says Samantha, was in pretty good shape for a crash survivor although malnourished and dehydrated.

Samantha thanked everyone for extending help in looking for Bentley during a difficult time for their family.

In the following YouTube video by The Dodo, watch a two-legged boxer survive a car crash where their vehicle flipped over five times, got lost and eventually recovered by his human family, just like Bentley did: