It was Tori McKay, an office administrator at Macon Funeral Home, and her husband, who thought of adopting Mochi to act as a grief-support dog.

The funeral home was “very open” to the suggestion.

By looks alone, grieving families would undoubtedly be comforted with Mochi. Photo courtesy of https://www.maconfuneralhome.com/

According to Tori, the Bernese mountain dog is not only very loyal but equally affectionate and gentle, which is why it has always been her choice as a potential grief therapy dog.

She added that this breed has a history of being excellent support and therapy dogs due to their kind disposition and laid-back nature.

Not only does Tori want to work funeral visitations with Mochi requested by grieving families, but she also wants the adorable pup to make nursing visits with her every couple weeks. 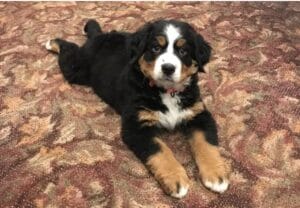 Tori is currently training and socializing Mochi, and the Bernese mountain pup will also head to Asheville for more training when she’s six months to a year old.

Tori shared a sad fact about Bernese mountain dogs: They do not have long life expectancies and typically live only between six to eight years.

That’s the reason why Tori wants Mochi’s life to hold as much purpose as possible.

She noted that Mochi has already made a difference among grieving families’ lives this month.

Learn more about Mochi and his upcoming role at the funeral parlor in the following YouTube video by Good Morning America: