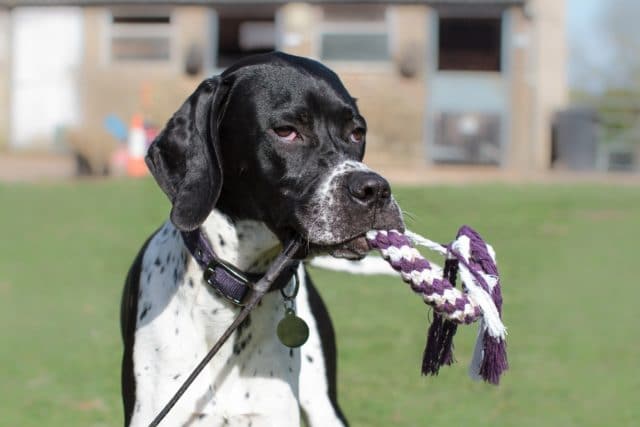 The veterinarian who completed a life-saving operation on a four-year-old pointer involved in a road accident was shocked to see countless shot pellets lodged in the poor dog’s body.

The veterinarian, Charlie Sale, was assessing the damage on the pointer named Cola when he realized he was not dealing with an ordinary dog.

Pointers are primarily used as gun dogs. Image by Lindsay66 from Pixabay

He was certain that Cola had an awful life before the accident.

Formerly a hunting dog in Cyprus, where he survived being shot by pellets dozens of times, Cola was rescued by his new owners, Rebecca Vickers and Alex McGreal, who brought him to his new home in the UK.

Rebecca and Alex thought all the while that Cola was an abandoned dog and wanted to give him a warm, forever home. They adopted the pointer before being flying him over to the UK.

But shortly upon arriving in the UK, Cola sneaked out of a cargo center near Manchester Airport and was run over by a vehicle.

Fortunately, a good Samaritan motorist, whose identity remained a mystery, risked his life by running towards Cola in the road to pull the poor pointer to safety.

Cola was rushed to Oakwood Veterinary Referrals in Hartford, Cheshire, for the life-saving surgery when Charlie had to put a metal plate and pin on Cola’s leg.

But when assessing the damage to Cola’s body, this was when Charlie found out that not only did Cola suffer large soft tissue wounds and shattered front leg but also had the most pellets lodged in a dog’s body that he’s ever seen in his 28 years as a veterinarian.

This pointer even had gun pellets lodged in his ear.

Rebecca and Alex now realize that Cola may have been an abused gun dog who may have fled to avoid being deliberately shot by his former owner.

After 12 days of recuperation, Cola made a full recovery and is now in his new home enjoying the company of not only his new owners but also of another pointer in the house, named Ronnie.

According to Rebecca and Alex, Cola is getting on well with is training and enjoys playing with Ronnie.

Cola has cheated death so many times and probably hoping that being run over on a major motorway is his last ordeal.

As for Charlie, it was a pleasure and a privilege to be able to treat such a brave dog as Cola.