Do you want flat-faced dogs because they’re cute?

The French bulldog, a flat-faced breed, is currently the most popular breed in the UK, having the highest puppy registrations from January to March 2020.

Learn how to care for flat-faced pups, like this Frenchie, before getting one.

But the Brachycephalic Working Group (BWG) has urged potential dog owners wanting to buy a flat-faced puppy to “think again” and be aware of their health problems.

Before you get one, there are specific health issues you need to learn about them.

Flat-faced dogs are prone to heatstroke because their short snouts don’t help them cool down by panting.

Dogs rely heavily on panting to lower their body temperature.

But having a short and broad head in dogs makes panting far less effective.

According to Emily Hall, a veterinary surgeon at Nottingham Trent University, dogs pant to cool down. But “without a nose,” panting is less effective.

This French Bulldog and English Bulldog are the best of friends. Both of them suffer the same kinds of health issues.

Flat-faced dogs even generate more heat by gasping to breathe than they lose by panting.

After scrutinizing almost a million dog data in the UK, researchers from Nottingham Trent University and the Royal Veterinary College found over 1,200 cases in which dogs received heatstroke treatment.

And there were twice as many cases with flat-faced dogs than those with long snouts.

Some short-faced breeds are at higher risk.

Compared to a Labrador Retriever, English Bulldogs have a 14 times greater risk of heatstroke.

But having more risk of developing heatstroke is not unique to flat-faced varieties.

Those with “double coats” like the Chow Chow and Golden Retriever are also at increased risk since their fur trap air against their bodies.

Size is also a factor.

Dogs that weigh more than 110lbs are 3.5 times at more risk of heatstroke than dogs weighing up to 22lbs. 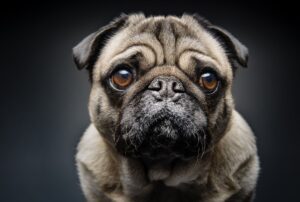 This pug wants lots of love.

Many flat-faced dogs also suffer from Brachycephalic Obstructive Airway Syndrome (BOAS), which leads to a lack of air into their lungs.

BOAS can be manifested by snoring, loud breathing, and continuous, heavy panting.

They also have difficulty breeding and giving birth and other ailments affecting their spine, eyes, hearts, teeth, and skin.

To learn more about the health issues of flat-faced dogs, watch this YouTube video by London Vet Specialists – part of the Linnaeus Group: