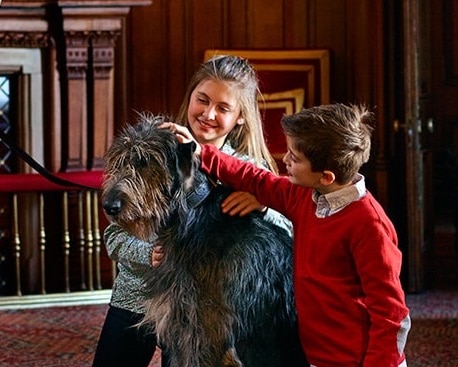 The 800-year-old Ashford Castle in County Mayo on Ireland’s west coast is offering something that can brighten up the faces of dog lovers: morning walks with its resident Irish wolfhounds.

These dogs are so majestic that Ashford Castle, dubbed ultimate fairytale escape, got these canines as part of its attraction.

Irish Wolfhounds are a fitting addition to the castle that operates as a hotel located in 350 acres of woodlands and formal gardens.

The Irish Wolfhounds are gentle giants who love to be around children. Image courtesy of Ashford Castle.

Not only is this breed the tallest among canines, with males standing around 3 feet at the shoulder, but they are also such graceful walkers that they lend elegance to the castle’s gardens.

Ashford Castle boasts of a knight’s armor near the reception and lavish interiors filled with chandeliers, gilded mirrors, and tasseled drapes.

No wonders its guests include heads of states, royals, and film stars such as Brad Pitt.

And the resident Irish Wolfhounds have bragging rights that they are part of the reasons why the castle attracted such guests.

According to the American Kennel Club (AKC), the Irish Wolfhounds were once used as big-game hunters. They were said to be fearless and capable of dispatching wolves in one-on-one combat. 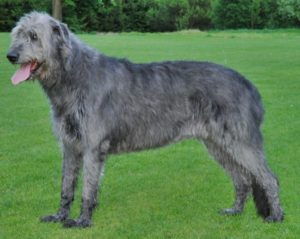 As their name suggests, Irish Wolfhounds were once used for hunting wolves. They were capable of dispatching wolves in one-on-one combat. Image courtesy if Wikipedia.

The Irish wolfhounds today have become serene and great companions. They are so gentle, love to be around children, and make great lap dogs.

This breed has also served as mascots of the Irish Guard since 1902 and could be seen during formal marches strolling along with Irish Guards at many parades.

The Irish Wolfhounds are the number 76th most popular dog breeds in 2018, according to the AKC.

Are you thinking of getting Irish Wolfhounds as pets?

Learn more about these gentle giants by watching this YouTube video courtesy of Dogumentary TV: