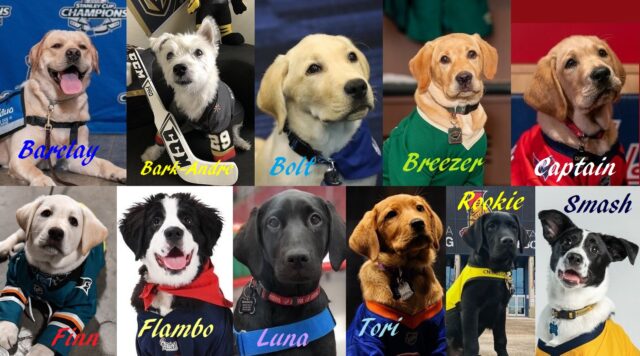 The results of the 2020 NHL Fan Choice Awards have been announced, and dog lovers were all thrilled to find out who was voted the NHL’s Best Team Dog.

It turned out to be the Washington Capitals’ adorable puppy Captain, who garnered 22 percent of the votes.

Captain defeated nine other dogs, including second placing Flambo of Montreal (16.4%) and Tori of the NY Islanders (12.7%). 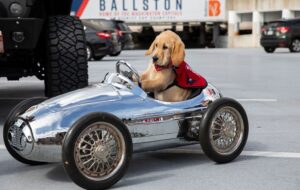 The San Jose Sharks’ Finn (9.4 percent) came in at fourth while the Arizona Coyotes’ Luna (8.9 percent) landed at fifth.

The other team dogs included in the voting were: Bolt of the Tampa Bay Lightning, Barclay of the St. Louis Blues, Rookie of the Ottawa Senators, Smash of the Nashville Predators, Luna of the Arizona Coyotes, and Breezer of the Minnesota Wild.

Captain, born on July 22, 2019, was introduced as the Capitals’ team dog on October 5 last year during the team’s Rock the Red Carpet event.

Alex Ovechkin carried Captain and walked him into Capital One Arena before their home opener against the Carolina Hurricanes.

Captain has since attracted 84,2000 Instagram and 48,000 Twitter followers and has stolen fans’ hearts from his interactions with players and fans.

He also appeared in the team’s annual dog calendar.

According to Capitals players, Captain likes the smell and the texture of hockey gloves, which he chews on and treats as a toy.

Players and fans will miss Captain when he begins works as a service dog.

Captain will be with the team for only 14 to 16 months as he receives basic training and socialization before returning to Smithtown, New York, for his formal service dog training. 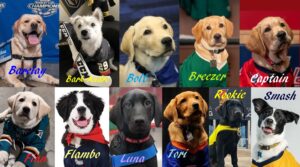 There’s an increasing number of team dogs in the NHL.

Montreal Canadiens’ Flambo is a Saint-Pierre Labernese and is also training to be a service dog.

The St. Louis Blues adopted Barclay, another yellow Labrador Retriever, last season to socialize him to become a service dog. He seemed to be a lucky charm as the Blues won their first championship. Barclay celebrated by eating from the Stanley Cup.

The Tampa Bay Lightning also has a yellow Labrador service dog in Bolt, the same as the San Jose Sharks’ Finn.

The New York Islanders first brought in Radar, a yellow Labrador training to be a guide dog, to be its first team dog. The team later got another team dog, another yellow Lab named Tori after Isles GM Bill Torrey.

The Arizona Coyotes’ Luna is a black Lab being groomed to become a service dog to a military veteran. She will be with the team until part of next season.

The Ottawa Senators also have a black Labrador named Rookie.

Smash, a mixed breed adopted by the Nashville Predators, has become so popular that the team is selling merchandise with his images on it, such as trading cards and socks. He is not being trained as a service dog so that he will be with the Predators long-term.

Another popular team representative, 12-year-old Jack Russell terrier named Bark-Andre Furry of the Vegas Golden Knights, wasn’t included in the voting. Bark-Andre is not a team dog but belongs to team owner Rick Williams. Bark-André’s real name is Fenway, but he was given a public name after the team’s star goalie, Marc-Andre Fleury.