A Golden Retriever named Osi will continue to bask in the Florida sun, thanks to 75-year-old Buddy Ackerman who pulled him out of the jaws of an alligator.

Buddy, a Florida man, was watching over Osi, who belonged to his daughter Jody, then on vacation. The dog was in then Buddy’s yard in Palm Harbor when a 7′ 7″ alligator bit Osi’s rear end.

Upon hearing Osi squealing while being locked in the jaws of the alligator, Buddy went to the rescue. While getting a hold of Osei, Buddy slipped and fell on his butt but continued to pull Osei away from the alligator. 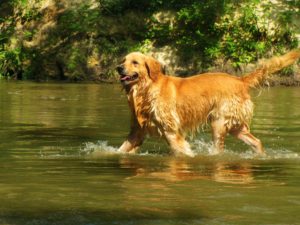 A Golden Retriever takes a stroll in the lake. Image by lisa runnels from Pixabay

The stubborn alligator wouldn’t let go of Osi, so Buddy gave it two kicks on the snout. Stung by the blows, the alligator opened its mouth and let go off Osi while it backed up.

Buddy was relieved that the alligator let go off Osi but realized that if their dog was of a much smaller breed like a Pekingese, they have to say goodbye to their dog. He should also be thankful that the alligator in his backyard was small for an adult as males generally measure between 9.8 and 15-feet long, while females are at 8.5 feet average.

Jody was very grateful for his dad’s gallantry in saving Osi and called him a hero, adding that she was glad no one was hurt.

The alligator that attacked Osi was captured by animal control personnel the following day.

There are over 1.3 million alligators in Florida, according to the Florida Fish and Wildlife Conservation Commission (FFWCC) who warned that dogs often attract alligators’ attention.

The FFWCC advised that dog owners should keep their pets on a leash near bodies of waters that may contain alligators and warned against letting dogs swim, play or drink near those areas.

In the following YouTuve video by CNN, another Florida man had to deal with an alligator in order to save his dog.