It’s not surprising for Giant Schnauzers to pull off deeds like this.

Because of the breed’s intelligence and desire to work, it has proven to be successful in multiple areas including search and rescue, herding, police and military work, dog sports, and as guide dogs.

While it’s uncommon to see Giant Schnauzers utilized as working dogs in North America, it has long been used for police work overseas.

Giant schnauzers were also used by the US Air Force as military working dogs in World War II, but weren’t used again until the early 1980s.

The Giant Schnauzer has a natural guarding and territorial instinct. They are big, standing up to 27.5 inches at the shoulder and weighing up to 95 pounds. 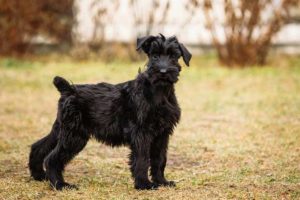 Giant Schnauzers are also high-energy dogs that require lots of exercises. You can take these dogs to long walks and jogging and learning dog sports.

It’s no wonder that Elliot was joining his humans who were out cycling when they rescued the Bald Eagle.

The Bald Eagle was brought to the Alaska Raptor Center, bird hospital in Sitka, Alaska, which has since released it to the wild.

After the Bald Eagle returned to full health, it was returned to nature in Juneau, Alaska the following day.

The Bald Eagle’s release was fast-tracked due to the likelihood that it was caring for young eaglets.

The center found that the eagle has a brood patch, an area of feather-free skin on its belly, which is used for keeping eggs warm during the incubation period.

Learn more about the versatility of the Giant Schnauzer in the following YouTube video by Dogumentary TV.