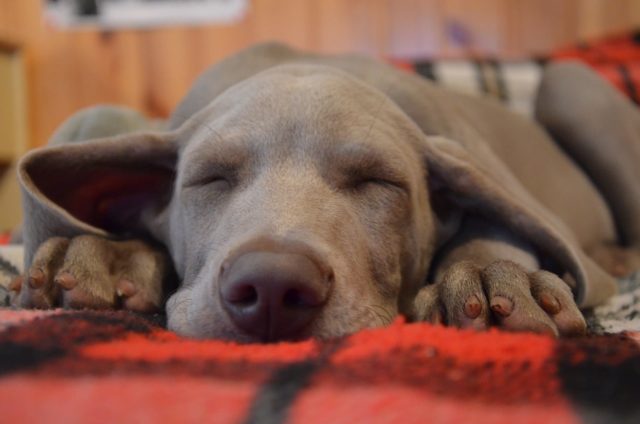 Just like people, dogs need proper care and attention after going through surgery. Chrissy Ireland, a staff from a dog shelter, understood this perfectly. And she did something extraordinary that made a lot of people notice.

Ireland worked at Conway Area Humane Society in New Hampshire. One day, the shelter rescued a hound mix named Prissy from a Tennessee junkyard. The dog had three beautiful puppies with her, which they also saved.

Now that she was in the shelter, the four-year-old dog had to be spayed, so she went through surgery. When she woke up, Ireland noticed that Prissy was not doing very well. She had seen the same thing happen to other dogs that went through a procedure – they had a hard time after waking up from the effects of anesthesia.

Ireland did the best thing she knew would comfort Prissy. She went inside Prissy’s kennel, lay down on the ground next to her, and cuddled her. She also showered the recuperating dog with lots of kisses and petting and whispered to her.

Prissy seemed to appreciate what Ireland was doing. She welcomed the hugs and the tender pats on her head and neck.

Unknown to Ireland, one of her coworkers, Debra Cameron, wanted to check in on Prissy, too. Cameron expected the dog to be resting from her surgery, and she was hoping to record a video of Prissy wagging her tail in her sleep.

But as Cameron approached Prissy’s kennel, she was surprised to see Ireland in the cage, lying down next to the dog. She couldn’t help but record a video of Ireland and Prissy sharing a cuddle. The shelter uploaded the video on its Facebook page, where it got more than a thousand shares.

So many people were touched by what Ireland did. They commended her for going the extra mile to make Prissy feel comfortable. Some major TV networks even picked up the story.

What Ireland did gives us hope that abandoned dogs like Prissy have a greater chance of living a better life. Thanks to people like her, dogs don’t just get rescued; they also get to feel loved and valued by the humans around them.