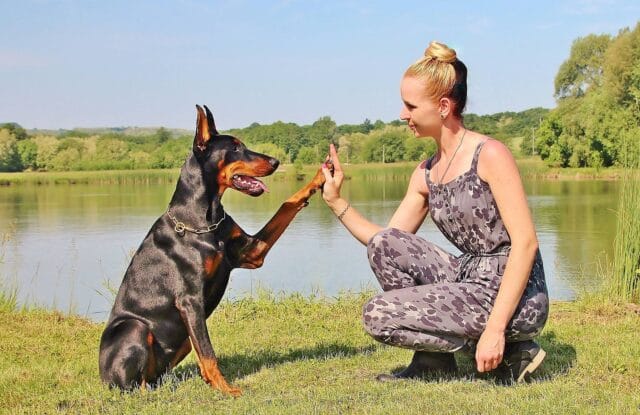 However, Ceasar needed 18 stitches to close the wounds in his right hind leg and back.

Natalie was walking Ceasar near the pond when an alligator, estimated to be six to seven feet long, came up out of the water and grabbed the Doberman by the right hind leg and dragged him into the water.

Upon seeing what happened, Natalie kept kicking the alligator, who was forced to release Ceasar, but only to get back again to grab the dog at the back. 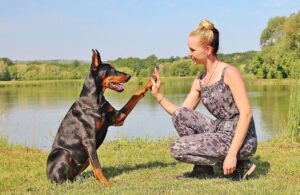 Photo of a Doberman and his owner, courtesy of Yama Zsuzsanna Márkus from Pixabay

Ceasar was crying, yelping, screaming all the time that he was under attack, but Natalie, who had little time to think as everything happened so fast, was not going to let the gator turn her pet into lunch.

Natalie kept pulling Ceasar out of the alligator’s jaw until the poor dog was released.

No one was around to help the dog owner and her pet, so the two limped home before Natalie brought Ceasar to a vet, where the bill reached $4,000.

She had called the Florida Fish and Wildlife Conservation Commission (FWC) to check the incident. The officer told Natalie that it would be difficult to catch the alligator as the pond is connected to a canal.

Natalie is worried that if the gator were aggressive enough to go after a Doberman, it would be a matter of time before it attacks a child playing near the pond.

She wanted warning signs placed in the area and for the eventual removal of the wild animal.

Nathalie plans to take Ceasar for more walks once he’s recovered, but would definitely avoid places near the water.

Still, Ceasar is lucky to be alive unlike a black Labrador mix named Hayes who lost its life protecting its owner from by a gator attack in Florida as shown in this YouTube video by FOX 13 News – Tampa Bay: