A Boxer named Max more than lived up to his breed’s name and went as far as taking three bullets to save his human’s life.

Max was in his favorite field with his owner Osmar Persico, 47 of Garibaldi, Brazil when this happened. 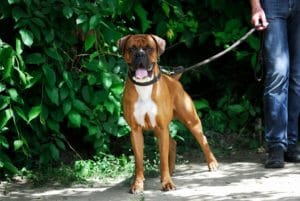 While parking his truck, Osmar, the pet owner, was approached by two armed robbers demanding the keys to his vehicle.

Osmar resisted the would-be carnappers who later opened fire, grazing him in the forehead.

When blood gushed out of the forehead, this infuriated Max who darted towards the attackers. One of them got scared and ran away.

So Max took on the remaining thief and dominated him in their duel.

However, the aspiring carnapper was able to pull out his gun and fire at Max who got hit in the chest and leg before retreating.

It was a knockout win for Max, who had to be immediately rushed to the vet by Osmar.

Max, who was adopted by Osmar three years earlier, is expected to make a full recovery.

Osmar was all praises for Max, saying that if it were not for his brave dog, he would have died.

So, will some please strap a championship belt around the waist of this heroic Boxer?