An incredibly gifted 3-year-old Boxer dog from New Zealand named Pixie had been taught in 45 minutes to do Cardiopulmonary Resuscitation (CPR).

Senior shelter officer Tania Butler, 35, taught Pixie the trick for the fun of it during the lockdown, but now realizes the Boxer would be able to save a life when needed.

Tania of Waikato, New Zealand, tests Pixie’s skills by lying motionless on the floor and pretending that she is unresponsive.

Upon seeing her under that situation, Pixie will spring into action and start pounding her chest. 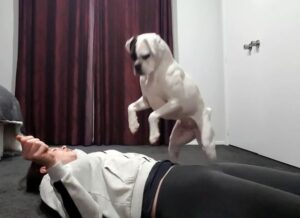 Tania describes Pixie as “insanely easy to teach,” “so very smart,” and “loves her trick training.”

After Pixie already learned quite a few tricks, including basic commands, competitive obedience, back stall, arm jumps, hungry hippos, and Jenga, Tania had wanted to teach the Boxer a special trick.

That’s when she recalled seeing Lusy Imbergerova and her dog Deril perform CPR at Crufts 2017, and wondered how quickly Pixie could learn the trick.

When Tania started training Pixie in April, it only took the Boxer three sessions of about 15 minutes each to learn the techniques.

Pixie is just one of Tania’s six dogs, consisting of three boxers, including Pixie, a pitbull, an American Staffordshire terrier, and an American bully.

Tania loves training her dogs, and it brings her so much joy to see her pets have a love of what they do.

While only a few of Tania’s dogs compete with the others just not being into training, that’s fine with her.

After all, her dogs are all amazing pets and the best cuddlers around.

Tania loves her pack and takes them all out on new adventures, whether it be going to the beach or forest.

Watch how Pixie does CPR in the following YouTube video by SWNS: