A Basset Hound named Basil was lucky to survive a poison scare after wolfing down 280 Cadbury Mini Eggs chocolate that weighed a kilogram.

The five-year-old Basil couldn’t wait to savor the Easter treats and helped himself with as much as his tummy can hold when a postman delivered the chocolate to their home in Harlow. 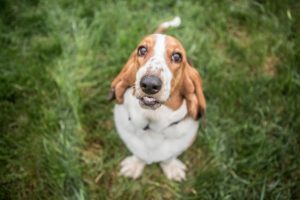 A Basset Hound. Image by jawestad from Pixabay

Incidentally, the chocolates, which were ordered online, were left in an area where Basil and his twin Chester could reach via their dog door.

Upon seeing the package, Basil and Chester ripped it open. But Chester was not into chocolates, so he left everything for Basil to devour.

Chocolates are poisonous to dogs, and soon enough Basil’s owners, Aimee and Andy Manley, found him throwing up violently. Aimee and Andy thought that after throwing up, Basil would be okay and they would just have to wait and observe as he recovered.

But his condition got worse in the evening, prompting Aimee and Andy to rush Basil to the Vets Now in Witham, Essex.

Aimee, 45, said he thought Basil would not survive having eaten that many chocolates.

According to Dr. Laura Playforth, of Vets Now in Witham, Essex, chocolates contain theobromine, a chemical which is highly toxic not only to dogs but to cats, as well.

Basil being a Basset hound, he had enough size to survive the toxins caused by the chocolates.

To avoid exposing their Basset Hounds to dangerous materials and another poison scare, Aimee and Andy, 48, have placed a sign on their gate about where parcels should be left.

A similar poison scare happened to a Boxer dog, which can be viewed in the first portion of the following video: